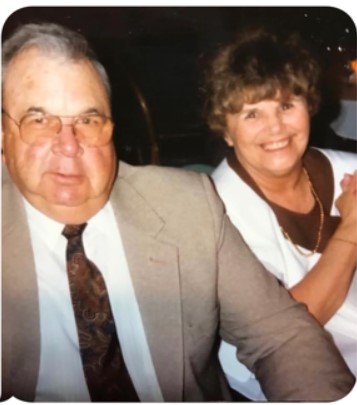 In loving memory of Jerry Don and Christine Ann Palmer:

He was born October 2, 1932 in Byesville, son of the late Earl “Red” Palmer and Martha (Thompson) Palmer.

Mr. Palmer was the former owner of the Green Lantern.  He was also an independent over-the-road truck driver.

He was a 1951 graduate of Byesville High School.  He was Methodist by faith.

Mr. Palmer was a US Air Force veteran, having served during the Korean War.  He received the Distinguished Flying Cross award for his service.  He was a member of the Byesville VFW Post # 3760 and the Cambridge Eagles Aerie # 386.

He enjoyed golfing and playing cards.  He was a former member of the Cambridge Country Club.

In addition to his parents, he was preceded in death by his siblings, James (Margie), David, Rilla, Jack (Helen), and Fred.

He is survived by his wife, Christine Ann (Feyko) Palmer; his daughter, Michele (Bob) Thompson of Byesville; a sister, Theda (James) Staten of Grove City; a sister-in-law, Lois Palmer of Arizona; three grandchildren, Erica Corrao and her children Tyler and Troy, Jeremy (Rikki) Thompson, and Joel (Brittaney) Thompson and their children, Greysen, Emma, and Loften; and several nieces & nephews.

As an expression of sympathy, the family asks that memorial contributions be made to the Countryview Assisted Living Center, 62825 County Home Road, Lore City OH 43755.

Mrs. Palmer had worked at Champion Spark Plug for 39 ½ years.

She was a graduate of Pleasant City High School and a member of the St. Michaels Byzantine Catholic Church.

Mrs. Palmer was a frequent contributor to several organizations, with St. Jude’s being her favorite.

In addition to her parents, she was preceded in death by her husband, Jerry Don Palmer; an infant brother, Eugene; and her siblings, John (Wilma) Feyko, Robert Feyko, and Marlene (Bill) Stolarik.

She is survived by her daughter, Michele (Bob) Thompson of Byesville; two brothers, Michael Feyko of Pleasant City and Terry (Theresa) Feyko of Georgia; a sister-in-law, Irene Feyko of Massillon; three grandchildren, Erica Corrao and her children Tyler and Troy, Jeremy (Rikki) Thompson, and Joel (Brittaney) Thompson and their children, Greysen, Emma, and Loften; and several nieces & nephews.

As an expression of sympathy, the family asks that memorial contributions be made to one of Christine’s favorite charities, St. Jude Children’s Research Hospital, 501 St. Jude Place, Memphis TN 38105.

Private graveside services with burial at Greenwood Cemetery, Byesville, will be held on May 14, 2021 for both Jerry and Christine.

A service summary is not available

Plant a tree in memory of Jerry and Christine Palmer

1 tree planted in memory of Jerry And Christine

My condolences to the Feyko and Palmer families.  Christine was our next door neighbor in Pleasant City before marrying Jerry, and I have fond memories of them both, and their daughter when she was little.  May God comfort you all. Rest in Peace, Christine and Jerry.

So very sorry for your loss Michelle. You are in my thoughts and prayers.

So sorry for your loss. You are in our thoughts and prayers.
Liz Lewis
Jim & Paula Bakos

Plant a tree in memory of Jerry and Christine Palmer